The Books That Find You

The nice thing about church basement book sales is that you always seem to find exactly the thing you didn't know you were looking for.  The other day I picked up The Treehorn Trilogy by Florence Parry Heide with illustrations by Edward Gorey. 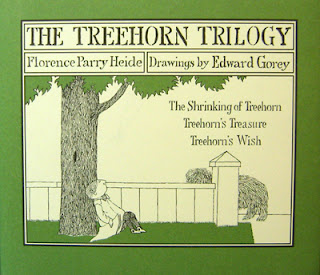 I told my son I bought it for him but I was lying of course.

I read it straight off.  It was quite wonderful and I did wonder why I'd never heard of it before.  Treehorn is a very Grimble-ish sort of boy which is just the sort I like best.

Also wonderful was this little piece by Florence Parry Heide talking about meeting Edward Gorey ("Edward Gorey asked me to call him Ted!") and about writing the books and where the original idea came from:

I was ready to write another story and was sitting at my typewriter ---but look at the time! it's nearly noon, and my five children would be rushing in for lunch any minute now--in those days, kids came home from school for lunch.  So I was rushing to fix something for lunch when: in they came.
"Can Mike come for dinner tonight, could you call his Mom right now?"
"Look, I skinned my knee, I need a bandaid!"
"I have to have a quarter for class dues!"
And more.  And all at once.  And I realized that I was saying "That's nice, dear,"  to each one. And then I thought that I'd probably been saying that every day for ever and ever. And because I had been looking for an idea for a new book, I thought what about a mother who keeps saying That's nice, dear, no matter what's happening. So: something really surprising happens to a boy and his mother just keeps saying things like, That's nice, dear. What might that surprising thing be?

You can read the rest of the piece on Curious Pages here.

There's a lovely obituary from the New York Times which talks about her meeting the illustrator of  her book Some Things Are Scary, Jules Feiffer.


“I saw her and it was love at first sight,” Mr. Feiffer said. “She was so alive, so gracious. She had all the good qualities that ordinarily make people boring, but with a kind of roguishness that made you like her.”

I'm now going away to be sad that she died last year (before I'd ever heard of her) and be happy that she lived. I'm also going to look for a copy of Some Things Are Scary.

Holly said…
It's a trilogy?! We grew up on the Shrinking of Treehorn but that's the only Treehorn book I know. I love it! I can't read this line without laughing, "First time I ever heard of a family naming two boys the same name," said the bus driver. "Guess they couldn't think of any other name, once they thought of Treehorn."
9 November 2012 at 03:20:00 GMT-5