"Adorable" is a word to be used advisedly... 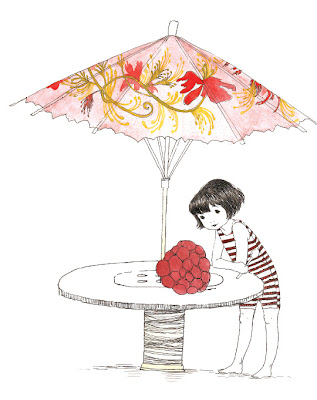 In earlier offerings by this team, When You Were Small and Where You Came From, Henry's parents told their son about life when he was "literally" small, walking his pet ant and sleeping in his father's slipper (this duo has Marcel the Shell beat by several years).

"Tell me about when you were small, too," Henry now asks his mother. "When I was small," she begins, "my name was Dorothea. But because the name was too big for me, everyone called me Dot." Twentysome solemn primary-school students appear opposite in a class photo; one is a girl in a red dress no bigger than a potted plant. Readers might miss the tiny figure, but they'll catch on within pages: "I went swimming in the birdbath," Henry's mother continues. "I played jump rope with a piece of yarn."

The humor in Morstad's pen-and-ink drawings lies in their seriousness; she draws the cocktail umbrella Henry's mother stands under and the mitten she sleeps in with the care of a botanical illustrator. "Adorable" is a word to be used advisedly, but it's applicable in this case. Ages 4–8. (Sept.)
Email Post