Today's guest blogger is Euan who is twelve and fascinated with film-making and the process of adaptation. 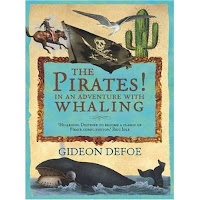 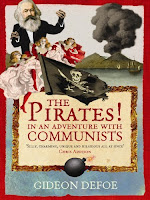 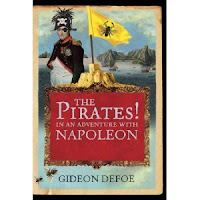 I like how the beginning of each book starts with an argument amongst the pirates (for example, what the best bit about being a pirate is), which turns into a brawl until the Pirate Captain comes in written as “all teeth and curls, but with a pleasant open face.”  At the beginning of each book he is compared to certain things, for example it is said that if he was a font, he would be either impact or Rockwell Extra Bold. After that he would settle the argument with a brilliant yet obvious-in-hindsight answer. 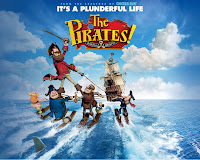 Produced by Aardman and Sony and directed by Peter Lord.  In the movie I liked how Aardman made a movie out of my favourite book with my favourite band in it (Flight of the Conchords) and one of my favourite actors David Tennant playing Charles Darwin. I also liked the addition of Polly, the dodo/parrot, into the story, as Gary the parrot didn’t make many appearances in the books.  Most of all I enjoyed the extremely funny jokes made along the way.

I enjoyed how the movie was centered around the first book, but involved bits from all four such as the “attacking boats” scene and Cutlass Liz (from Whaling), the fans and “speech about why a shark would beat a Dracula in a fight” scene (from Communists) and “the pirate of the year award” scene, Pirate King and the “baby clothes scene” (from Napoleon, although it was Scurvy Jake who went into baby clothes rather than the Pirate Captain).

If Aardman is considering making a second movie, I have a few suggestions.

1: it should be centered around the Whaling/ Moby Dick adventure because it had an exciting plot
2:  it should involve the “Black Bellamy might not be so bad anymore” scene (from Scientists, but rather than suggesting the HMS Beagle, suggesting another, equally empty in gold terms, ship)
3: it should involve the “sponsorship” scene (from Communists)
4: it should involve the “beekeepers” scene (from Napoleon, although not the whole scene as it took up a great deal of the book. Perhaps that’s what the for mentioned “Black Bellamy might not be so bad anymore” scene could lead to)
5: it should involve the character Jennifer, as she seems to be the only other sensible pirate on the boat in the books and if the pirate with a scarf was the only sensible character, it could drive him utterly and completely bonkers.
6: Ahab should be played by Tom Baker. If you’ve seen the Blackadder Season 2 episode “Potato” you will see he makes a brilliant (slightly insane) captain.

I hope you enjoyed this review and are looking forward to the Pirates! In an adventure with Romantics (published August 30, two days after the DVD release of the movie) as much as I am.

Ed. note:  there is an excellent interview with director Peter Lord here loaded with lots of bonus material.  It's also well worth spending some time dallying on Gideon Defoe's website here.  I'm now off to check out the Pirates! Band of Misfits app for the iPad to see if it can help fill the gap between now and August.