Re-visiting an old post about Maurice Sendak in light of his death yesterday....

There's a really excellent article by Jonathan Jones over at the Guardian. It has the enviable title of "Wild Things, I Think I Love You." (Thanks to the wildly loveable Betsy Bird over at Fuse #8 for the link).

Jones makes an interesting connection in reference to the illustration style employed by Sendak:

At first sight it might seem Max, the hero, is a bad boy pure and simple. We first meet him wearing a white wolf suit, banging a nail in a wall with a hammer almost as big as he is; on the next page he's chasing a dog with a fork. But the style reveals something else. Sendak deploys deep perspectives and immaculate hand-drawn cross-hatching recognisably derived from Hogarth, whose art also happens to be full of joyous, naughty, boisterous children - children of nature in the language of the 18th century.

I had to go look for myself...and look, there's Max's great-great granddaddy banging his drum.

I'd recommend that anyone truly wild for Sendak goes out and finds a copy of a book called A Caldecott Celebration: Seven Artists and Their Paths to the Caldecott Medal by Leonard S. Marcus (published in a 10th anniversary edition). Somewhat lifeless title but a fascinating book. Good stuff here for fans of William Steig, Chris Van Allsburg, Robert McCloskey and others, but the real prize in the kinderegg for me was the inclusion of photos of the early (1955) dummy for Where The Wild Horses Are, Sendak's original conception for the book and the 1963 palm-sized dummy for Where the Wild Things Are.

Finally, there has been a lot of ink given over to what a profound influence Sendak has been on subsequent writers and illustrators of children's books.  I know that Julie Morstad, (whom I have been immensely privileged to work with over the past few years) is a great admirer of Sendak's work and it's just possible that his influence can be seen in the light anarchic touch of this little bare-bottomed, joyous boy. 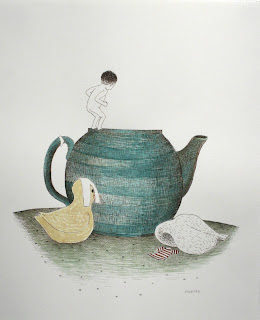 I recently sent Julie the manuscript for a new story about a little girl named Sadie and she wrote back to say that was the name of Sendak's mother.   It feels like a good connection.