There was a period in my life where I wrote a weekly column for the books section of a newspaper (prompting my very young son to ask me why my picture was in the paper every week when I wasn't even famous). There were many perqs to this job - I didn't have to get dressed or leave the house very often and I had a steady supply of things to read delivered to my door - it was pretty much the job I dreamed of having as a bookish, introverted teenager - but as well as bringing the world to my door, it brought me some quite wonderful new people and one of my very favourites is Susan Juby.
I first spoke to Susan when Alice, I Think, the first title in her wonderfully funny trilogy, was published in 2003 and the following year when Miss Smithers was published she did the Proust questionnaire with me, in character as Alice.  Susan is one of the brightest, funniest, loveliest writers I know.

I've followed Susan's career ever since reviewing those first novels and seeing them made into a television series.  I'm a fan of her subsequent novels Getting the Girl and Another Kind of Cowboy, but was most deeply impressed by her publication of Nice Recovery, a memoir in which she details her struggles with alcoholism as a young adult.  The book is both moving and funny but beyond that it strikes me as profoundly useful and honest in a startlingly rare way.  The sort of book that James Frey would write if he had intelligence and integrity.

Never one to follow a straight line, Susan followed that with a novel that crossed over into adult fiction, The Woefield Poultry Collective (published as Home to Woefield in the US).  And she's now gone on to explore science fiction with the upcoming Bright's Light.  Hard as she is to keep up with, I was glad to catch her long enough to do this little question and answer session.


What surprised you most about your most recently published book?
My most recently published book is The Woefield Poultry Collective. I was surprised by how much fun it was to write from four alternating points of view. Tinkering with diction and other elements of voice was interesting, as was trying to surround the same incident with differing perspectives for comic effect. Whether successful or not, the work was engaging. I have also been pleased by the positive response the book has gotten from a wide range of readers of all ages.

What was the hardest thing about writing it?
In this case, I will talk about the book that's coming out this August. Bright's Light is a dystopian-sci-fi comic mashup. When I set out to write it I was naive about the work required to build an entire closed world, its history and all the attendant references and so forth. Getting the tone right was also an arduous task. I finished the book yesterday and I've been working on it for well over two years. I used to think memoir writers were the brave heroes of the literary world. Now I am convinced that those who write fantasy and sci-fi have captured that crown.

What are you working on now?
As noted, I just finished Bright's Light yesterday. Today I have started a new book that I've been researching for a little over a year. It's a crime novel for adults. God forbid I should be coherent in my efforts!

How do you feel about being called a children’s writer?
Many of the most influential writers in my life have been writers for children (or at least teens), so I feel just fine about it.


Is there a book you most wish you'd written yourself?

Most recently, I wish I'd written The Family Fang by Kevin Wilson. I also wish I wrote Charlotte's Web, Lord of the Rings, The Hobbit, Cold Comfort Farm, Catcher in the Rye, A Tree Grows in Brooklyn... you get the picture. I wish I wrote your books, too, Sara. They are so delightful and I'd display them everywhere.

When (or where) do you write?
First thing in the morning and sometimes again in the afternoon, in my studio.

Who do you write for?
Myself, mostly. I write what I'd like to read.

Did you want to be a writer when you were a child?
I wanted to be a writer until I was thirteen and lost all confidence that I could achieve much of anything. It took a long time to rebuild to the point where I was ready to try writing again.

If you could live in a book, which book would it be?
The Borrowers. 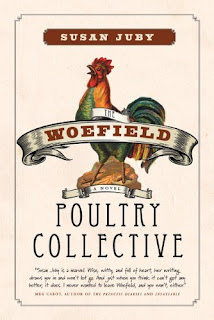 I have a copy of Woefield to give away to one lucky reader (Canadian addresses only, please).  Just leave a comment below to be entered to win.  Thanks to HarperCollins.

To make this fun, why not include a story about a chicken in your comment.

You can take a peek at the book here and learn more about Susan and her books on her fantastic website here.

Shari Lapena said…
I would love another copy of the Woefield Poultry Collective! I read it a few weeks ago and it is absolutely hilarious.
My story about a chicken--I saw a chicken attack and eat a mouse at Riverdale Farm and was almost sick.
Sorry I don't have a funny chicken story.
16 May 2012 at 09:48:00 GMT-4

JaneP said…
Woefield Poultry Collective is on my reading list for sure and I would love to win a copy.
When I was growing up my parents used to keep chickens and my dad built a tunnel that they could go through into the field from their pen which we shut at night when they were all back home. We had a rooster who would always insist in being the first bird out in the morning. If any of the hens went out before them he would chase them back so he could be the first out!

Catherine Kelly said…
Thanks for sharing this story. It's always nice to learn more about the writer that creates the characters we bond with. No chicken story to add except that it was on the menu this week.
18 May 2012 at 19:14:00 GMT-4

Sara O'Leary said…
Congratulations, Jane. My red-headed randomizer has pegged your number to win! If you email me your address I will get the book sent out to you.
23 May 2012 at 06:42:00 GMT-4

Christian Frey said…
Sorry it's too late for the contest but I'll leave a chicken story anyway. I used to keep my horse at a barn that had racehorses. One day a chicken came with one of the racehorses, and when the horse left, the chicken stayed. (Actually, I think he was a rooster, but we just called him the chicken).

He was pretty cocky and used to come up to horses when they were eating their oats and peck them on the nose so they would move away and he could eat out of their dish. Well, one day he tried this on the wrong horse - my friend's giant thoroughbred mare. There was quite a commotion in the stall - the mare trying her best to stomp the chicken with a front hoof, the chicken conducting emergency evasive maneuvers.

After a few frantic rounds, the chicken ejected himself through the bars of the stall gate and landed in the middle of the aisle, feathers quite ruffled. He fluffed himself huffily and proceeded down the alleyway, nothing much wounded but pride.