Adventures on the Moors 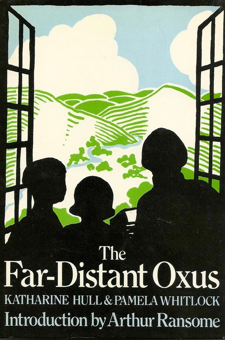 I've just been loaned a copy of The Far Distant Oxus, courtesy of my friend Jane of Jane's Books in St. Martins, New Brunswick.  I'd never heard of the novel or its authors before but just look at what a beautiful cover that is!
The story behind the story is very promising as well.  The novel was written by Katherine Hull & Pamela Whitlock who were both schoolgirls at the time.  They sent the manuscript off to Arthur Ransome who then took it to his own publisher, Jonathan Cape and it was published in 1937.
Google books describes it as: "The adventures of three children and the friends they meet while vacationing on a farm on the moors of southwest England."
You can read more about the book (which is the first of a trilogy) and see a preview chapter here.