I hardly ever succumb to the temptation of reading the "weird news" that pops up when I'm looking for real news (which is weird enough most days, thank you), but had to take a peek at "Toymaker makes cuddly animals with mental health issues."  Really?

According to the article:


The toys range from Dub, a turtle who suffers depression, to Kroko, a crocodile with an acute phobia of water, as well as an hallucinating snake called Sly and a sheep called Dolly who has a personality disorder.

And here's Dub the depressed turtle... 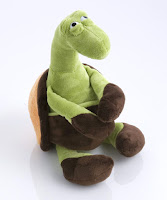 You can play a very bizarre game of "doctor" at parapleusch where the toys are sold.
Email Post