Today is International Literacy Day and I almost missed it.   Fortunately ABC Life Literacy Canada have declared September Life Literacy Month so I have lots of time to catch up.


I only found out about all this because I was reading in the Globe and Mail about problems with declining literacy rates in Canada and that lead me to look up The Canadian Council on Learning to find out more.  Then I got hooked by a piece on Comics and Prose Literacy for Boys  (I keep typing literacy as litearcy which would be an embarrassing slip to let stand).


Here's a sample from the article:


Research has suggested that boys may report being less interested in reading than girls because their literary interests are not well-represented in school libraries and classrooms. Boys are much more likely to enjoy reading science and non-fiction books, informational texts and “how-to” manuals. They are also more likely to enjoy fantasy, adventure stories and stories that are scary or “gross” along with books about hobbies and things they do or want to do.

Boys also tend to prefer visual media, such as the internet, newspapers and magazines, that focus on sports, electronics and video games. Yet, while boys show clear preferences for specific reading material these genres and media are generally under-represented or even unavailable in school libraries, a reflection of the views of teachers and librarians who judge such material inappropriate.

I will confess that I've always been a bit of a snob about comic books but I am coming around.  I have two sons and while the elder has been a voracious reader from an early age, the younger turned out quite differently.  He wasn't what I would describe as reluctant reader as I understand the term, but rather a perfectly competent reader who was strongly visually-oriented and treated texts as inspiration for projects rather than something to immerse oneself in.  Maybe that is a fair definition of one sort of reluctant reader.


The first book that this boy read - and by that I mean read in that "don't talk to me" and "I'll have supper later" sort of way was Jellaby, a graphic novel by Kean Soo.  And that's what made me a convert.


Since then, the boy has become much more of a reader, although he does have some of the characteristics described above.  He likes to read for information and he likes humour - this means that the series of Horrible History books have been a huge hit with him.  He's worked his way through all of the Calvin and Hobbes and most of the Peanuts books, including Sparky, the biography of Charles Schultz written by Beverly Gherman for young readers. But he's also reading more prose fiction and particularly loves Roald Dahl and Philip Ardagh.


The article mentioned above includes recommendations of comic books and I will be looking for Melvin Monster by John Stanley which is being re-printed by the fabulous people at Drawn & Quarterly.  I would welcome any other suggestions in this line. 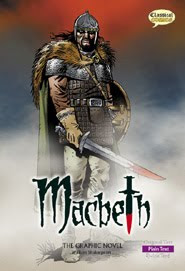 Going off on another tangent, this has reminded me to recommend (again) the series of Macbeth graphic novels produced by Classical Comics.  Since Macbeth is part of the high school curriculum here, it would be fantastic to see these books made available to boys either through their school libraries or local libraries.  There are three versions available: original text, plain text and quick text.


I think that it's brilliant idea and along with several other Shakespeare plays there are a number of other titles available including Wuthering Heights and Great Expectations.
Email Post