Funny conversation with young son who is awaiting Christmas even more anxiously than ever this year, because that's when the new Doctor Who will be on.  We'd been talking about the fact that Neil Gaiman was writing an episode for series two and I showed him the photo just posted on Gaiman's blog which shows Matt Smith standing between Neil Gaiman and Steven Moffat right after they'd done the table reading for the new script.

"So that means because I've met Neil Gaiman, I've met someone who has met Matt Smith," I told Euan.

He did an exaggerated jaw dropping and wandered off.  Half a moment later he was back with his jaw dropped even further.  "You've met Neil Gaiman?" he exclaimed.

Lately, there seem to be fewer than six degrees of separation between nearly anything and Doctor Who.  I picked up a novel by Esther Freud called The Sea House for a lovely spate of grown-up reading, and told my young son that I thought she was the daughter of Clement Freud, who, of course, wrote Grimble.  When I googled this, I realised that it was Emma Freud I was thinking of (and that Esther's father was Lucian Freud), but I also learned that when Esther Freud was an actress one of her roles had been in Attack of the Cybermen.  And that she is married to the "Other Doctor," David Morrisey.

We are looking forward to seeing what ilk of monster Gaiman chooses to deploy in his episode.  And in the meantime, we are thinking we might need this new set of figures:  The Eleven Doctors. 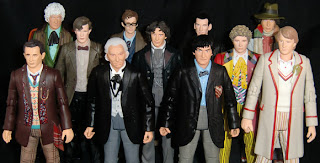 So nice to see Paul McGann in there with the rest of the boys.
Email Post