You Have to Love a Boy in a Striped Shirt

This video of Oliver Jeffers talking about his books, career and process at OFFSET 2009 has already popped up a few places .... 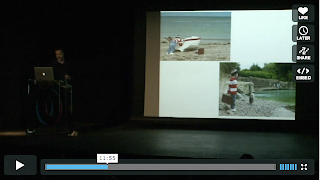 During his talk Jeffers showed pictures, including several staged photos of his cousin Henry done at the time of the launch of an exhibition of art from his book Lost and Found.


In this one Henry is inside the penguin enclosure at the Belfast Zoo and in the words of Jeffers:  "I don't know if you can tell from that picture, but he's absolutely terrified."
I love it.

Anonymous said…
Fantastic!
There is nothing I love better than being shown the layers and layers of meaning in children's books and art. Thanks for this treat.
19 August 2010 at 23:47:00 GMT-4