There's been international coverage of something that happened on British Columbia ferries this week.  The on-board bookshops will not stock Annabel Lyon's The Golden Mean because they deem the cover inappropriate.
According to The Province newspaper:


B.C. Ferries spokeswoman Deborah Marshall defended the move Friday.  "The publisher of this book approached us over a year ago," she said.  "Because we're obviously a 'family show' and we've got children in our gift shops, we had suggested we could carry the book if there's what's called a 'belly band,' wrap around the photo."

Marshall said that, when publisher Random House refused, B.C. Ferries chose not to carry the book.

The cover features a picture of a naked youth on a horse. The book is a fictional account of the time the philosopher Aristotle was tutor to a young Alexander the Great; it has been widely praised in literary circles.

The New Yorker picked up the story and now The Guardian's Alison Flood has written about it.
Judge for yourself. 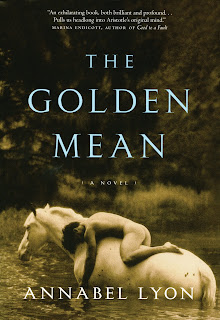 When I showed this to my young son and asked if he felt it was inappropriate, he scoffed: "There's a bum in The Snowman and that's for children."
Email Post