Have promised to watch the Jackie Coogan Oliver Twist with younger son today.  He's already watched it once and despite the fact that I've found it on youtube insists we watch it on the VHS tape someone gave him.  Just like they did in 1922, I suppose.

Go to 4:16 to see little Oliver ask for more gruel ... and then get shaken about like a rag doll.  At then at 6:06 there is a great sequence where Oliver dreams of "food, glorious food."


Oh, and here's a very nice cover for a Classic Comic edition: 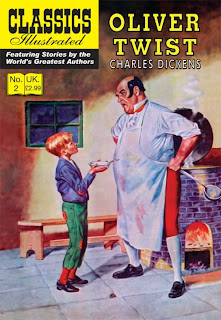 And here is the relevant passage from the book:


The room in which the boys were fed, was a large stone hall, with a copper at one end: out of which the master, dressed in an apron for the purpose, and assisted by one or two women, ladled the gruel at meal-times. Of this festive composition each boy had one porringer, and no more- except on occasions of great public rejoicing, when he had two ounces and a quarter of bread besides. The bowls never wanted washing. The boys polished them with their spoons till they shone again; and when they had performed this operation (which never took very long, the spoons being nearly as large as the bowls), they would sit staring at the copper, with such eager eyes, as if they could have devoured the very bricks of which it was composed; employing themselves, meanwhile, in sucking their fingers most assiduously, with the view of catching up any stray splashes of gruel that might have been cast thereon. Boys have generally excellent appetites. Oliver Twist and his companions suffered the tortures of slow starvation for three months: at last they got so voracious and wild with hunger, that one boy, who was tall for his age, and hadn't been used to that sort of thing (for his father had kept a small cookshop), hinted darkly to his companions, that unless he had another basin of gruel per diem, he was afraid he might some night happen to eat the boy who slept next him, who happened to be a weakly youth of tender age. He had a wild, hungry eye; and they implicitly believed him. A council was held; lots were cast who should walk up to the master after supper that evening, and ask for more; and it fell to Oliver Twist.