The latest addition to my bookshelf is titled

How to Do Nothing with Nobody All Alone by Yourself,
by Robert Paul Smith with illustrations by Elinor Goulding Smith.

I wanted this re-print edition (from Tin House Books) because of this piece in Papercuts which suggested it was a precursor to the Iggulden brothers' Dangerous Book for Boys, which has provided us with hours of entertainment ... hours filled with making of newspaper hats and hiding the pence and so on. (Check out their fab website by clicking on the book title).

I would recommend The Dangerous Book for Boys over The Daring Book for Girls, particularly for the sort of girl who isn't going to flinch at the "Boys" in the title. I was a girl with my own scout knife, but I do remember being told at an early age that I couldn't read Sherlock Holmes because it was a boy's book. (This bit of wisdom was passed along by a little red-headed boy and left me wary around red-headed boys right up until the day I had one of my own.)

And where can we get one of these?  Maybe in time for spring break?

But back to How to Do Nothing with Nobody All Alone by Yourself. I confess that mostly I wanted this book because I loved the title. It makes me happy. I am filing it away with my other favourite titles: Toilet Training in Less than a Day and The Gist of Swedenborg.

Then, on receiving the book, I was pleased to see that it boasted that rarest of creatures--a blurb that might actually make me want to buy the book:


Every great book reminds us that we're all alone in the world. At least this one provides us with the means to entertain ourselves while we're here. ~ Lemony Snicket 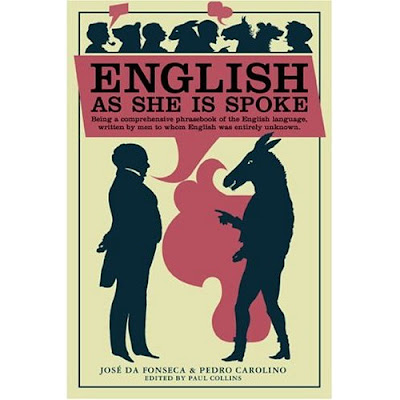 And there's an introduction by Paul Collins, which is funny because the book I'm carrying around with me (for something to do when I'm all alone by myself, not that there's much chance of that very often after the advent of parenthood), is The Book of William: How Shakespeare's First Folio Conquered the World by Paul Collins.

Which reminds me of one of one of my other favourite titles,
published by the Collins Library: English as She is Spoke.


Okay, but back to How to do Nothing with Nobody All Alone by Yourself. It also has a really good opening line, and I am nothing if not a sucker for an opening line:

I don't know about you, but I wasted all but about fifteen minutes of my childhood.


I said above that I consider The Dangerous Book for Boys to be a good choice for children of either gender, but I'm not yet sure I would recommend How to Do Nothing with Nobody All Alone by Yourself for younger children because opening it at random the first line I read was "... if it's knife with a sharp blade, watch what you're doing ...."

This may, in fact, be the dangerous book for grown-up boys.
Email Post

Marina Endicott said…
Naturally I had to go right to The Gist of Swedenborg—that one now has a bookmark to itself.