Young son and I watched Mr. Magorium's Wonder Emporium (written and directed by Zach Helm) the other night and it was so much better than I expected it was going to be that I felt a little sad at the thought of how it had pretty much come and gone without making any noise at all.

One of the really wonderful things about it - in a satisfyingly long list of nice things which included a Buster Keaton marionette, a Kermit the Frog cameo and a boy actor (Zach Mills) who managed to do endearing without mugging - was the title sequence, which was credited to the wonderful William Joyce (George Shrinks, Rolie Polie Olie and many more).

I can't work out how to embed the title sequence but you can watch it here. It's beautiful.

And really the toys were amazing. I badly, badly want that Buster Keaton puppet. Here is an article about the company that made it. My son decided that what he really needed was one of the Ugly Dolls pictured in the film. Luckily he is more resourceful than his mother and made his own. 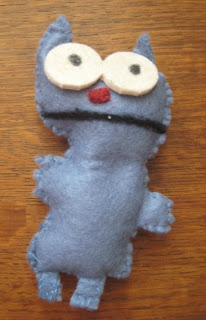 I see that on the Magorium's site they have a Toy Creator feature but I don't think that's what they meant.
Email Post
Labels: William Joyce

Unknown said…
Those credits! Nothing like the general marketing for the movie, which certainly kept us away. If the movie is at all like the credits I'm now going to have to find it. Anyway, I'll watch anything with a Buster Keaton puppet in it.