Had a nice time chatting about childrens' books on the CBC the other day - the time always flies by. Angus Byers of Montreal's fantastic Babar Books was there, as was Kathy Conroy of the Eleanor London Public Library. After making our own recommendations, we answered questions from callers.

One interesting query was about picture books with non-white protaganists. We talked about books like Amazing Grace by Mary Hoffman and Caroline Binch, but one that occurred to me was Edward and the Lucky Eureka Wish Company by Barbara Todd with illustrations by Patricia Storms. I found it interesting that Edward's race was in no way a factor in the story being told and that the choice made by the illustrator could well be an example of what in theatre or film would be called colour-blind casting. 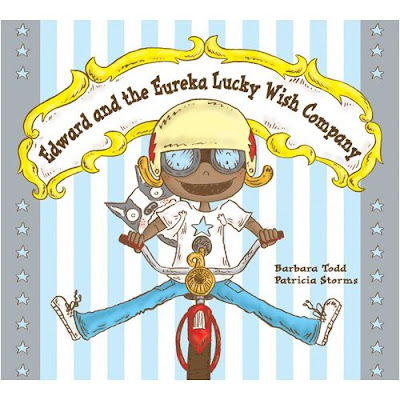 I was curious enough that I fired off an email to Toronto illustrator Patricia Storms and got the following reply.

"That's interesting, your thoughts about Edward. I have wondered about it myself. You are the first person to bring up the subject, though. To date, no one who has seen the book has made any comment to me about the colour of the boy's skin. All I hear is that it looks like a fun book (phew!). I'm inclined to think that this is a good thing, because it means that so far, the question has not been asked (out loud, anyway) as to why wasn't the boy white instead of dark skinned."

And yes, Edward and the Eureka Lucky Wish Company is fun - check it out. Meanwhile, I'm wondering if anyone out there can think of other examples where the skin colour of the child in a picture book isn't directly related to the story being told but is just who they are.
Email Post

patricia said…
I was talking to my husband about this subject last night. He works for the Toronto Public Library, and does some of the kid's programs at his branch, so he's quite familiar with their picture book collection. He could think of quite a few stories where the main character was a girl of colour, and the girl's race was of no consequence to the story (of course, could he remember the actual titles? Nooooo....)

We both agreed that the beautiful stories by Ezra Jack Keats fit that category. Does the race of the child in 'The Snowy Day' really matter, or 'Goggles' or any of his other tales? I don't think so. An interesting aspect about race regarding Keats...it was only a few years ago that I found out about his actual background. All these years I had just assumed he as African American.
11 April 2009 at 11:16:00 GMT-4

m said…
I was also going to mention 'The Snowy Day'. It's hard to think of anything else with the protagonist being non-white. Can think of more ensemble-like books, which aren't character driven (like counting books), but I don't think those count.

Sara O'Leary said…
Yes, Ezra Jack Keats is a prime example, but I'm still having a hard time coming up with others. We'll see if your Guy remembers some titles, Patricia, or what Marita's research turns up.
I wonder how much children notice this too. As someone who was a pasty-faced child that probably identified with Frances the badger as much as any other picture book character, it seems an interesting question.
12 April 2009 at 13:32:00 GMT-4

m said…
I think it would be a whole lot more noticeable if there weren't so many kids books populated with animals or monsters. A person of any colour can find themselves in Frances the Badger or Little Bear. Is that why illustrators go with animals so often?
12 April 2009 at 19:04:00 GMT-4

Sara O'Leary said…
I thought it might be because you're less likely to get the "that looks nothing like an armadillo" type of criticism. Given that most of us don't spend the better part of our day staring at armadillos, badgers and the like.
12 April 2009 at 19:06:00 GMT-4

patricia said…
I think that's one of the reasons authors use animals as their protagonist in picture books (heh, I certainly don't mind doing it!). There's less limitations when you use an animal. It crosses all boundaries of race, and even sometimes gender. And let's face it – most kids love cute animals. I sure as heck do!
14 April 2009 at 09:11:00 GMT-4