In the words of Mr. Eliot, "I've got to use words when I'm talking to you."

And if you're in the market for some new ones, may I recommend the following:

Burgess Unabridged: A Classic Dictionary of Words You Have Always Needed By Gelet Burgess. This is a new edition published by Walker and with an introduction by Paul Dickson. 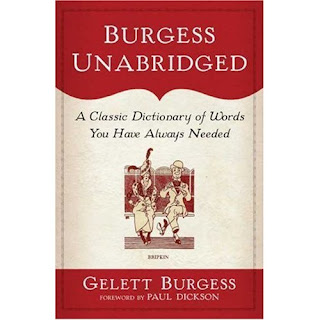 Burgess is the creator of the Goops, and died in 1951 at the tender age of 85. But he's also the creator of any number of words, some of which - like blurb - we use, and some of which would come in incredibly useful. May I offer up gorgule (an unwished-for gift), lallification (a verbose story), and oofle (a person whose name you cannot remember). Now off you go and put those to good use.

But first, I've got another book to tell you about: L is for Lollygag: Quirky Words for a Clever Tongue which is full of previously coined words that could also come in useful - galoot, hodgepodge and moxie being fair examples.

The book is published by Chronicle - who do some very fun things - and is completely unattributed on the cover. A little investigation reveals that it was developed and compiled by Molly Glover and illustrated by Melinda Beck. I can't find an image online to show you what a pretty thing this and my camera has gone to Belfast without me, but here's a peak at Melinda Beck's charming work:

kittenpie said…
Lollygagging was my dad's favourite word. My friend thought until she recently heard someone else use it that he had made it up!
8 May 2008 at 14:17:00 GMT-4