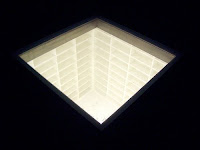 Somebody named chris 9 has the wonderful photo you see above on his Flickr page here. I've borrowed it (and hope he doesn't mind), to illustrate this news item for today.

Here's the full press release from The Earth Times:

Berlin - Germany began ceremonies Friday to recall how Nazi Germany heaped books on bonfires 75 years ago in a ritual "execution" of democratic ideas that completed the Nazis' takeover. The trauma of the May 10, 1933 burnings, conducted by students on city squares and cheered on by Nazi crowds, runs deep in Germany, inspiring politicians to condemn censorship and recently to defend Danish newspaper cartoons that many Muslims considered blasphemous.
In Berlin, President Horst Koehler called for "freedom of the arts" to be upheld worldwide.
"Whoever tries to prohibit books, films, theatrical shows or caricatures is on the wrong road," said Koehler in remarks prepared for delivery at a Berlin ceremony hosted by the Academy of the Arts in Berlin on Friday.
He said Germany's past experience of this obliged it to stand up for freedom of opinion in other parts of the world today.
Records show that at least 35,000 books, many from libraries, were burned in 22 cities between May and the end of August 1933. Copies of most survived and many of the titles became best-sellers again when reprinted after the Second World War.
Actors, authors and schoolchildren were to read from the works of some of the around 130 authors whose works went up in flames, among them Bertolt Brecht, Sigmund Freund and Thomas Mann.
On Saturday, Berlin's renowned Humboldt Library and the Cervantes cultural institute of Spain were to joint hosting readings and recitals in Berlin from works which the Nazis denounced as un-German.
The event was taking place on August Bebel Platz, the square where some 40,000 Nazi supporters once gathered to witness a book burning. Today an underground memorial marks the spot. Conceived as an "empty library" visitors can view it through a glass window built into the pavement.
Email Post
Labels: Burning books