I've just received an advance copy of a new graphic novel called Skim from Groundwood Books. You can read more about it on the Groundwood site. 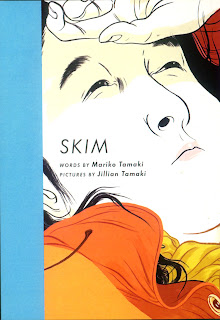 The book features (as the cover states) words by Mariko Tamaki and drawings by Jillian Tamaki and a fantastic main character in Kimberly Keiko Cameron - known as Skim - a private school girl and would-be Wiccan goth. I've only got as far as the meeting of Lisa's big sister's Coven (which also turns out to be her AA group), but I'm already hooked. I think it's lines like this one: "You can tell when Lisa's nervous because she acts like I'm an idiot."

Marina Endicott said…
That looks absolutely gorgeous. Can't wait to read it. I'll have to visit the Groundwood site, thanks.

I would like to introduce to you Mperience (www.mperience.com), a web
platform on which you can share in a brand new way movies, tv-series,
music, art, and books. It also allows you to blend videos of artistic
content with your own words, simply creating short stories called Memes
that you can spread to a wide audience by a simple click.

As you can see, we have many themes in common with your blog and we
would like to publish on Mperience some of your articles.
Actually we already inserted some your posts on our correspondent pages, including "Skim"(http://www.mperience.com/view/Skim_(graphic_novel))and 2 posts on "Grimble"(http://www.mperience.com/view/Grimble)
We’ll appreciate if you’ll put on your blog the Mperience’s reference,
just copying and pasting a html code that I’ll give you in a second
moment, if you agree.

I hope that we could keep in touch and collaborate also in the future.
So, if you are interested, please don’t hesitate to contact me for further
information, questions or suggestions.
Mirna
Mperience
mirna.gvozdenovic@mperience.com
8 July 2010 at 09:54:00 GMT-4