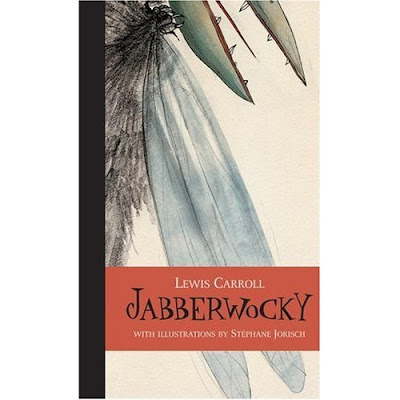 Lewis Carroll had a good idea to write Jabberwocky because it's a great poem. I even tried to write it myself, but unhopefully I forgot how to write out grabe. It's good to have another version of the poem. The drawings, well, look a lot like him, and the part where it says snicker-snack? Ooh-la-la. But it 's kind of funny how he's holding a bouquet of roses except they're all dead. He uses it like a vorpal sword. My favourite made up word is Callooh! Callay! I have no idea what it means but it's fun to say. 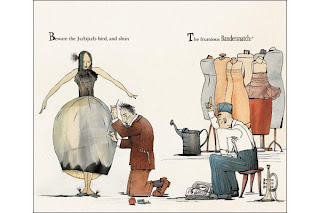 I am a big fan of the Kids Can Press Visions in Poetry series and of Jorisch's work. Most recently, he has illustrated Edward Lear's The Owl & The Pussycat which is on of my all-time faves.
The production values on these books are so high, and I love all the attention to detail (the colours, the paper, the ribbon binding!)

And look at how beautiful the illustrations are: 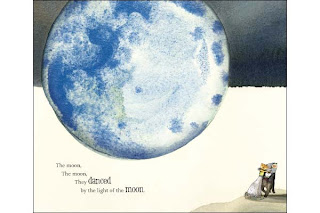 So far, in addition to Jabberwocky and The Owl & The Pussycat, they have brought out the following in beautiful editions:

Casey at the Bat by Ernest L. Thayer and iIllustrated by Joe Morse
The Highway Man by Alred Noyes and illustrated by Murray Kimber
The Lady of Shalott by Alfred, Lord Tennyson and ilustrated by Geneviève Côté
The Raven by Edgar Allen Poe, illustrated by Ryan Price

Euan suggests we need to buy all of them

I would love to see Kids Can do W.B. Yeats's The Stolen Child (imagine if they got Julie Morstad to illustrate this one!) Any other suggestions?
Email Post
Labels: Picture Books